Inclusion is key to national recovery.

“Our biggest challenge is that we are not seen. I have to work twice as hard so that people can get to know what my business is about’’, says Maria Elizabeth Esposito, microentrepreneur.

In 2020, Maria Elizabeth Esposito (Eli) wanted to launch her line of handmade accessories in Santo Domingo, Dominican Republic. Her online shop transitioned into a physical space and she was hoping to make a profit that would allow her to set up a new workshop to begin working on new pieces.

Eli is a Dominican micro-entrepreneur, a black and lesbian woman, owner of several online shops, and a member of the organization Mujeres Sociopolíticas Mama Tingo, which works to prevent early unions among girls, teenagers, and young women in neighborhoods and bateyes (settlement around a sugar mill) in Santo Domingo.

In March 2020, the Dominican government and other countries around the world took preventive measures to mitigate the health effects of the COVID-19 pandemic. Including the temporary cessation of economic activities. Micro, small and medium-sized companies (MSMEs) such as Eli’s were negatively impacted; their plans were postponed.

“When the pandemic came, people thought the world was going to end and my business was not an essential thing to acquire anymore, people were not interested in my products. I wondered what I was going to do, I didn’t know what to do. After I had been through so much, it couldn’t be that my dreams had come to that’’, reflected Maria Elizabeth Esposito.

According to our survey, conducted with the Ministry of Industry, Commerce, and MSMEs (MICM) last year, 50% of entrepreneurs believed that the business they ran could go bankrupt as a result of the crisis.

The pandemic affected us all in different ways

For those living in a situation of greater inequality, the health and socio-economic crisis not only jeopardized their dreams but created uncertainty about their food security and livelihoods.

Our report on the socio-economic impact of COVID-19 on Lesbian, Gay, Bisexual, Transgender, and Intersex (LGBTI) people in the Dominican Republic revealed that in 26% of LGBTI households, at least one member had permanently lost their job, and 54% had to reduce the number of meals per day due to reduced household income.

“I’m 37 years old, in this country when you reach a certain age you stop being hired. The doors I knocked on did not open for me. Being black, lesbian and a supporter of the fight for human rights, I find obstacles when accessing different job opportunities, although many people tell you that they don’t have a problem with that. But I remember my ex-boss telling me that I didn’t have the face to work at the front desk,’’ says Maria Elizabeth Esposito.

Monday, March 1st marked the International Zero Discrimination Day, a call by the UN to put an end to the inequalities that arise in the absence of respect for human rights.

Women, people with disabilities, migrants, and LGBTI people are some of the greatest targets of discrimination and exclusion in the country and around the world.

“People are afraid of what is different. Prejudices prevent you from meeting wonderful people and the possibility of changing their lives.’’ Says Maria Elizabeth Esposito.

Discrimination creates barriers that hinder human development. These must be faced every day by people with disabilities in the Dominican Republic.

Before the crisis, there were more than one million persons with disabilities, 64% of whom did not have access to work, with the percentage of women with disabilities not employed (77.5%) being higher than that of men in the same situation (55.3%).

According to the International Organisation for Migration (IOM), during the pandemic, 75% of the population of the National Regularisation Plan for Foreigners, of Haitian majority, had lost their income and about 90,000 migrants of Venezuelan nationality had been affected.

In response to this reality, UNDP implemented an Inclusive Recovery Programme, with funding from the Canadian Embassy, the USAID, and the support of the Ministry of Industry, Commerce, and MSMEs.

The program aimed to support MSMEs from these population groups by strengthening their resilience, partnerships, and access to resources and information.

This program strengthened the management skills and resilience of 273 people with new business ideas, entrepreneurs, and MSME owners.

Eli, who participated in the Inclusive Business Week, had the opportunity to structure her business idea and was selected to receive technical support, which will allow her to resume her plans.

‘’The part I loved the most was the Inclusive Business Week. It was the week that built the most in me, with it I was able to build my business portfolio. These processes have to exist, as they give us more visibility and support. This is a stimulus for me’’, says Maria Elizabeth Esposito.

For UNDP, the key to recovery in all countries must be the inclusion of all people, which implies a human rights-based approach to country responses to COVID-19 (participation, inclusion, transparency, equality, and non-discrimination), placing vulnerable groups at the center of recovery.

“Doors should be opened to MSMEs from vulnerable groups and their products should be purchased. Processes must take into account the inequalities experienced by transgender people or people with disabilities. We need to get closer to neighborhoods and popular sectors. We have to think about how to make these processes reach more people’’, says Maria Elizabeth Esposito.

From UNDP, we will continue our commitment to promote inclusion and human rights in the framework of national recovery, aiming to resume the path towards achieving the SDG and ensure a more sustainable and egalitarian country, leaving no one behind. 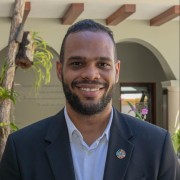